It’s true. In the last 20 years or so I’ve seen Sister Hazel play more than 100 times. If you know me well, you’ve seen me post about these guys on FB:

END_OF_DOCUMENT_TOKEN_TO_BE_REPLACED

Hey Karin. Merry Christmas! Can I stop by and bring you some breakfast?

END_OF_DOCUMENT_TOKEN_TO_BE_REPLACED 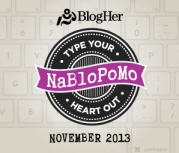 So, if you’re on FB at all, there is a meme going around where someone is assigned a number and must share that many things about them that people may not know. When someone else likes the status, they get a number from the person who shared and so and so on and so on. Yesterday a friend was assigned the ridiculous number 35, so she broke up her sharing into three posts over two days. By the third post, I sort of forgot the rules and she had shared some really cool things so I made the mistake of commenting on the final post and was assigned the number 29. Since I had to write a post anyway today, I figured I’d kill two birds with one stone. I hope you don’t mind indulging me.

Without further ado, here are 29 Things You May Not Know About Me:

1. I stopped celebrating my birthday many years ago. Instead I celebrate the anniversary of my 29th (coincidence?) birthday. Consequently, I’m sometimes a little fuzzy about exactly how old I am.

2. I make some of the best french fries in the world – and they are baked not fried.

3. I totally kick-ass at air hockey.

4. I sang in a rock band in high school.

5.  I am named after my grandfather (Reginald).

7. My favorite author is Anne Lamott. My younger daughter’s middle name is Annie after her.

10. Growing up I collected puppets and wanted to work for Jim Henson. I was not a puppeteer when I worked for the company.

11. I love snow. I particularly love walking on snowy streets at night.

12. My undergraduate degree is in Anthropology and my Master’s is in Film and Video.

13. During college I spent three summers working as an archaeologist.

15. I wanted to be a marine biologist and study dolphins when I was growing up.

16. I once managed a NASCAR store.

17. I am afraid, seriously afraid to fly. I do it anyway.

19. I’m a Unitarian Universalist. I grew up Catholic, but being a UU feels like it’s where I’ve always been meant to be.

20. I have Buddhist leanings but wouldn’t call myself a Buddhist.

21. I miss living in a city where I could walk everywhere.

22. Macklemore’s Same Love makes me cry every time I hear it.  “No freedom ’til we’re equal, damn right I support it.”

23. I backpacked through Europe for a couple of weeks after graduation. The most life-changing part of that trip was visiting the Berlin Wall.

24. When I was a child, I loved John Schneider (from The Dukes of Hazzard). In high school my boyfriend arranged for me to meet him after a concert. John was charming and kind and I was enthralled even though my crush on him had long passed.

26. One of my dogs was written into a NY Times Best Seller novel. I had no idea until I read the book.

27. I can change a tire and drive a stick-shift.

28. I watch the Macy’s Thanksgiving Day Parade every year. Every. Year.

This is day 21 of the National Blog Posting Challenge.

Tonight I attended my church’s annual auction. Money raised this evening will go to all sorts of projects and services throughout the year. Thousands and thousands of dollars are raised – it’s pretty impressive.

The thing I love most is the wide variety of events that people come up with to donate. This year alone we had a Flea Market scavenger Hunt, A Princess Bride Costume Party, A 1970’s DVD concert viewing party, Italian, Spanish and Chili Feasts, and my personal favorite, Latkepalooza. I offered a Vision Board Workshop and an annual fossil hunting trip for the auction this year.

It’s a great event filled with laughter and silliness all for a great cause.

For the last few years, I have had the honor of acting as one of the auctioneers for the event. It’s an evening I look forward to every year, mostly because things like this inevitably end up happening:

How can I not love being part of this?  Have a good night friends!

This is post #9 for the National Blog Posting Month Daily Challenge.

I was traveling recently and had to catch an early morning flight. As I was moving through the security checkpoint, I noticed the line I was standing in moved a bit slower than the other because numerous bags were being pulled off the belt for additional examination. As I got closer to the man running the x-ray machine, I could see he was new and was being trained by another TSA agent who would point to something on the screen, pull a bag, open it, show him what was inside and then put the bag back on the belt.

On the other side of the personal scan, a woman and I were left waiting for our bags. She was about my age, dressed very professionally – clearly heading off to an important business meeting early that morning. Her laptop bag and purse had made it through the scan but her carry-on had not. We waited about a minute and I checked over my should to see if everything was okay. The agents were pointing at the screen and looking in her bag with some confusion.

“I’m sorry,” she said with a bit of an embarrassed smile. ‘It’s a teapot.”

“They’re searching my bag because there’s a teapot in it.”

I couldn’t help myself.  “Do you always travel with a teapot?”

“Yes. You should see what happens when I stuff my bras into it.”

Suddenly,  I had the overwhelming urge to buy this woman breakfast just so she could answer all the questions that had flooded my brain. Unfortunately, at that moment, TSA cleared her bag. She picked it up, wished me a great day and walked off to find her gate.

She is so going to go into a book I write someday.

My point being, of course, is that inspiration is everywhere. I don’t care if you are a writer, an architect, a teacher or a physicist. You can stay locked up in your own little world and for a while, that will sustain you.  You’ll have plenty to think about, draw from and create around. However, after a while, that well goes dry and you have to look outside yourself in search of new inspiration. Inspiration that by it’s nature exists in places where you least expect it.

So the lesson here is simple: Go out, live your life fully and for God’s sake pay attention. You never know where you are going to find that next character for your book, or color pallet for your living room or even the life-saving breakthrough for your current research.

It’s a little like discovering bras in a teapot.

My nephew, currently a college student, once asked his mother to buy him a video game he wanted to have.  He was eight or nine at the time if I remember correctly.  My sister-in-law, wanting to teach him about the value of money and working to get what you want, told him he would have to earn the money to buy the game. He seemed okay with that and after he went off to play, she started thinking about various chores and projects he could do around the house to raise the money he needed.

A little while after that, she received a phone call from one of her neighbors, telling her how cute her son was.  When she asked why, the neighbor explained he had just knocked on her door and offered to sing her a song for a dollar.  My nephew came back home a few minutes later with a pocket full of money. At the time, my sister-in-law was horrified that her son had gone busking door-to-door. Everyone else saw it as endearing and completely worth a dollar for the honor of hearing him sing.

When she asked her son why he’d done it, my nephew said he was thinking about what he was good at and came up with singing.  Everyone in the family said he was a good singer but he knew they wouldn’t pay him.  He decided to see if the neighbors would pay him for a song.  Turned out, they would.

I remembered this story while I was cruising around a site named Fiverr.  If you haven’t been there, basically, it’s a site where people list what they will do for you for $5.00.  Maybe you want your message tweeted to 15000 people, maybe you want a 60 second voice over recorded, or in my case, maybe you want a Romanian bunny named Freddy to eat a piece of lettuce that says happy birthday to your best friend.  (Best $5 I have EVER spent.) It’s all listed on Fiverr.  And as a way to waste some time, it’s an absolutely brilliant place to see what creative ideas people have come up with in pursuit of your $5.00.  Are people going to get rich on this site? Maybe one or two if something goes viral.  But you can’t deny, people have some really nifty offerings up there you can’t get anywhere else.

So my point, if I have one here, is that you never know what’s going to work until you try. Maybe it seems completely ridiculous at first.  That’s okay.  Sometimes the ridiculous is just wonderful enough that people want it. And if they pay you a little something for it, that’s just icing on the validation cake. Go for the ridiculous and see what happens.  If nothing else, you’ll have a little extra fun in your life and who couldn’t use that?

“Twenty years from now you will be more disappointed by the things you didn't do than by the ones you did do. So throw off the bowlines. Sail away from the safe harbor. Catch the trade winds in sails. Explore. Dream. Discover.”
-Mark Twain